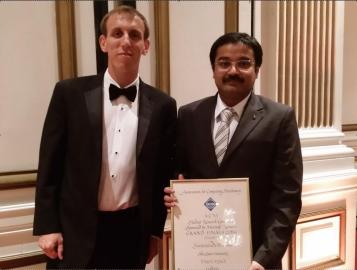 Ohio State CSE students and faculty received a Distinguished Paper Award at the ACM SIGPLAN Conference on Object-Oriented Programming, Systems, Languages, and Applications (OOPSLA) in October. OOPSLA is one of the top publication venues in the area of programming languages and software systems.

The Valor paper also received an OOPSLA Distinguished Artifact Award, honoring Swarnendu's implementation of Valor for exceeding expectations by a committee of evaluators.

In addition, Swarnendu won first place in the graduate category of the 2016 ACM Student Research Competition (SRC). His winning entry, which was based on the Valor work before it was published, was selected from the winners of SRCs across all ACM conferences. Swarnendu and Mike were invited to the ACM Awards Banquet in June where Swarnendu received the award.