The Ohio State University's annual Innovator of the Year awards recognize researchers who are working to promote commercialization of university intellectual property. The researchers are usually honored at the annual Office of Research and Corporate Engagement Office Research and Innovation Showcase in April, which was canceled this year due to COVID-19 protocols. Now a series of surprise meetings over CarmenZoom serves as the announcement.

“Research and innovation are at the heart of what I want my presidency to be,” said President Kristina M. Johnson. “It’s also at the heart of our land-grant mission and it’s how we influence those we serve. The way to serve is by doing research in the betterment of society.” 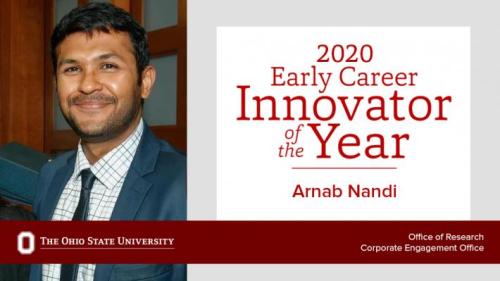 Arnab Nandi, associate professor in the Department of Computer Science and Engineering, was named the Early Career Innovator of the Year. His work focuses on bridging human interaction and data infrastructure. He is also founder and CEO of Mobikit, a data infrastructure platform for the future of mobility.

Nandi said the award, like his research, was built with the support of department leadership, university partnerships and graduate and undergraduate students. 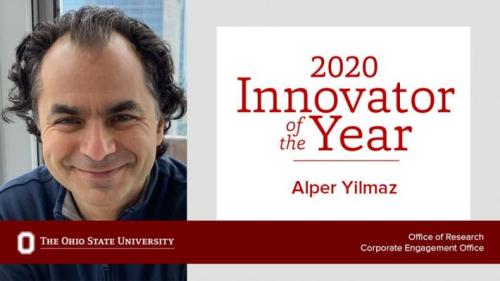 Alper Yilmaz, professor of geo-informatics in the Department of Civil Environmental and Geodetic Engineering, is the university’s Innovator of the Year. Yilmaz was nominated because of his development of wireless geolocation technology. The patented technology is the basis of the startup firm Ubihere (pronounced you-be-here), providing a standalone solution to finding the position of an object or person.

Yilmaz’s cutting-edge research on map learning uses deep-learning methods similar to how humans learn to navigate an environment. Comprising two primary elements, an inertial measurement unit and an artificial intelligence processor, the wireless geolocation technology uses a map of the region and a multiple hypothesis approach to estimate a position of an object. His research has received over $11 million in funding from sources including NASA, the National Science Foundation and industry.

“It’s still an issue: How do we navigate without GPS and continue to advance the art of autonomous navigation? The work that you’ve done in this space is just truly amazing,” said Senior Vice President for Research Morley O. Stone.

“Your career is a model of innovation and your startup Ubihere is a tribute to your entrepreneurial spirit,” said Scott Osborne, vice president for economic and corporate engagement.

Yilmaz said he appreciated the support and leadership at Ohio State. The Zoom ceremony and award were unexpected.

“This was a big surprise. I wasn’t expecting it. It would not be possible without department support and the support of my graduate students,” he said.