May’s tenure at Pixar Animation Studios spans more than 24 years. In his current role as CTO, he supports all technology at the studio, including software R&D, information systems, RenderMan, and the development of visual effects tools and processes for each film. He started as a shading and modeling technical director on “Toy Story 2.” For Pixar’s next film, “Monsters, Inc.,” he helped to pioneer the fur technology and overall look for the character Sullivan. He went on to work as a supervising technical director for “Finding Nemo,” “Cars,” “Up” and “Brave.”

“I’ve been at Pixar for awhile and you sometimes forget how cool it is that we make things that feel like they’re alive—the characters in our movies,” May said. “It’s still magical. What’s also interesting is there is a ton of engineering and technology behind every frame of animation that we make at Pixar.”

May’s lifelong love of art and technology, and an article in a 1984 issue of Science magazine, led him to choose a career in computer graphics, attend Ohio State and work at Pixar. Featuring a computer-generated image by a future Pixar colleague, the article highlighted, among others, former Ohio State Professor Emeritus Charles Csuri, who is considered to be the father of computer art.

“I loved my time at Ohio State. I took every course and did everything I could related to computer graphics. I worked at ACCAD [the Advanced Computing Center for the Arts and Design]. I did medical visualization with Don Stredney at the Ohio Supercomputer Center,” he said. “I worked on a couple of our own animated films. I wrote the animation system we used. I wrote the renderer we used.”

At ACCAD, May taught a class on digital lighting for art students and showed them how to write shaders—short programs that generate patterns in surface materials of 3D objects. Teaching students with no experience how to program was a pivotal moment for May, “It was really inspiring. It’s influenced how I think about things today—bringing art and technology together and supporting people to do things they maybe didn’t think they could do.”

Sharing Pixar’s frequent refrain that, “Art challenges the technology and technology inspires the art,” May discussed some of Pixar’s most notable and newest innovations. These include RenderMan, Pixar’s Academy Award-winning 3D rendering technology, and Presto, their proprietary animation system.

“Pixar has a really, really long legacy of research in computer graphics and computer science, things like compositing, subdivision of surfaces, particle systems, character animation … many areas of rendering including motion blur, shaders and RenderMan,” May said.

Noting the studios are “always looking for new ways to apply technology to make better movies,” May said they also do a lot of work in AI and machine learning.

A more recent innovation, the open-source Universal Screen Description or USD is making waves outside the film industry and has been called the “HTML of the metaverse.” The open-source software is used to describe everything in a scene.

“It’s like a definition, a recipe, of everything that’s there—the geometry, the shapes, the cameras, the lights, the materials and everything,” he explained. “We think USD allows us to do scenes that are about 100 times more complex than we could do before. USD allows us to make really complex virtual worlds.” 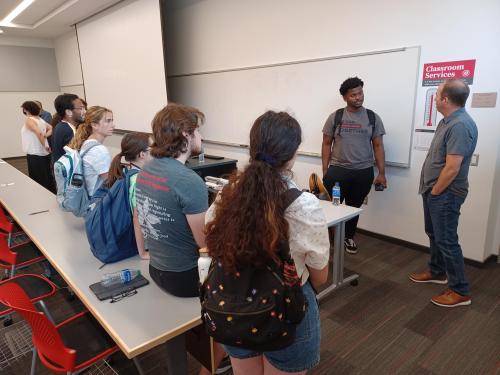 Sharing that computer graphics is experiencing a second resurgence and people who understand technology, graphics and making content are very much in demand at Pixar, May encouraged interested students to learn as much as they can and experiment with free animation software.

“There’s so much material available. There’s free software now you can download and do animation, just start doing it,” he said. “In general, animation is super interdisciplinary, so study films, and draw, and do some programming. It’s super helpful, if you’re more interested in technology, that you still understand aspects of the artistic part of it, or the story part of it or the filmmaking part.”

May received a PhD in computer science and engineering, as well as bachelor’s and master’s degrees from Ohio State. He was named a Distinguished Alumnus of the College of Engineering in 2011.