CSE Ph.D. student Nicholas Kashani Motlagh and his advisor Dr. Jim Davis recently had their paper "Learning When to Say I Don't Know" published at the International Symposium on Visual Computing 2022 in San Diego on October 3rd. They received the Springer Best Paper Award along with a $500 cash prize. 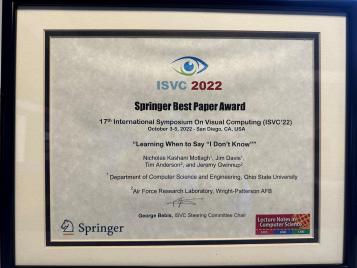 Paper summary: Neural classifiers have shown impressive performance in diverse applications ranging from spam identification to medical diagnosis to autonomous driving. However, the typical decision function forces these networks to sometimes yield unreliable predictions. We propose a new Reject Option Classification formulation to identify and remove regions of uncertainty in the decision space for a given neural classifier, enabling it to say, "I don't know." The approach was demonstrated on several popular vision and text datasets. This was a collaboration between Ohio State University and the Air Force Research Lab.